Main Street Mount Pleasant aims to bridge preservation of our downtown’s historic character with the activities and qualities that enhance community vitality, including promotion of upper-story residential units in the Main Street district.

Early on a frigid morning in January 2011, Lisa Oetken got a call telling her that the most historic building in Mount Pleasant, Iowa, was on fire. Main Street Mount Pleasant, the organization Oetken has headed since 2005, was poised to assume ownership of the red-brick Union Block building on the town’s central square in a matter of days.

Firefighters were able to get the blaze under control within a few hours, but the flames and resulting water damage devastated the eastern half of the structure’s interior, and the rest of the building was soaked by the hoses’ powerful blast. The blaze, the fire department speculated, had originated in an apartment on the eastern side of the second floor.

Oetken knew that if the 155-year-old Italianate building were allowed to deteriorate further into what she describes as “a pile of bricks on the sidewalk,” an irretrievable part of Mount Pleasant’s history would be lost. The Union Block—constructed in 1861 on West Monroe Street as a joint investment by Henry Ambler, a lawyer, and E.L. Penn, a dry-goods salesman—may as well be mortared with the town’s heritage. Main Street Mount Pleasant’s purchase offer on the gradually decaying building had been accepted, and Oetken and her team were hoping to rehabilitate it into a business and event space. But with the massive damage caused by the fire, the three-story Union Block was looking like anything but a sound investment.

“I said, ‘Lisa, you had better tear that check up,’” says Paul Dennison, who had donated the money to Main Street ($76,340 in total) to purchase the building. Oetken couldn’t imagine doing anything but restoring the structure to something Mount Pleasant could be proud of again.

“We quickly got an engineer in to see if it was structurally sound to renovate the building, and they said it was,” she says. “We were off and running.”

Dennison and his wife, Joyce, local philanthropists who also own area radio station KILJ, went ahead with the purchase and donation. Oetken was able to secure $200,000 in seed money from the city of Mount Pleasant to get the project started, and community members began the long, slow process of raising enough funds to cover the entirety of the construction costs. It would ultimately take three years and $3.9 million in donations, grants, and tax credits to bring the Union Block back to life as a retail, office, and event space.

“The initial feedback was that we were crazy,” says city administrator Brent Schleisman of the restoration. “It was definitely a leap of faith by us. 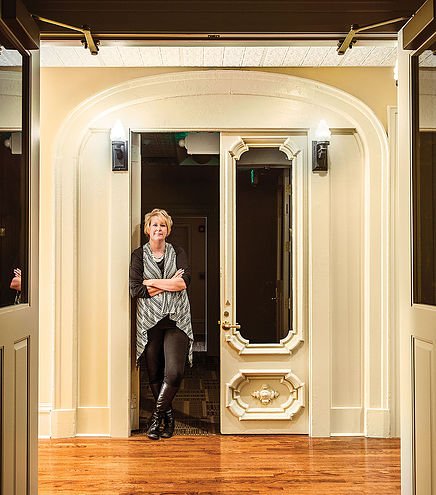 “Ever since the Union Block’s bricks were first stacked, it has played an integral role in the city’s development and sense of identity. A sketch from around the time it was built depicts a dry-goods store, a boot and shoe shop, a law practice, and a piano and organ retailer jostling for space on the first and second floors. In the time since, a rotating cast of businesses has come and gone, some knocking down or adding walls according to their specific needs.

It’s the Union Block’s spacious third floor, though, that holds the strongest echoes of the past. Originally constructed to hold legal trials, it became a town hall for abolitionists and women’s suffrage activists, one of the only indoor spaces in the city big enough to hold hundreds of people. Frederick Douglass and Sojourner Truth both took the podium there in the 1800s, bringing far-flung progressive ideas to the small farming community. And in perhaps the largest point of local pride, Arabella B. Mansfield took the bar exam on the third floor in 1869, becoming the first female lawyer in the United States 50 years before women had the right to vote. Mansfield is so beloved in Mount Pleasant that a bronze statue of her stands on the campus of Iowa Wesleyan University, just a few blocks from downtown. Her face is turned down toward a book, as though she’s oblivious to the change taking place all around her.

Main Street Mount Pleasant aims to bridge preservation of our downtown’s historic character with the activities and qualities that enhance community vitality, including promotion of upper-story residential units in the Main Street district.

Light filters in through the south-facing windows on the third floor of the Union Block on a mild morning, casting a grid of golden squares on the carpeted floor. With the exception of a steady hum of activity in the wireless retailer and screen-printing shops in the first-floor storefronts, the building is quiet today. The third floor is now a popular venue for local weddings, and a few scattered tables with folding chairs stacked on top break up the vastness of the space. 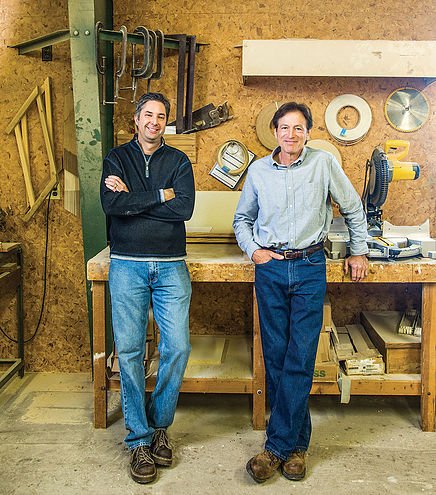 Ted Wiley, the restoration project’s general contractor, points to the places in the third-floor ceiling, now hung with wrought-metal chandeliers, where glimmers of sky once peeked through holes in the lath and plaster.

“There were pigeons,” he says. “There were big blue swimming pools, the plastic ones you buy at Walmart, all around here catching the water leaks. It was a mess.” Stray cats lived in the basement. True to its history, the Union Block had held apartments and a variety of business ventures in the past several decades, but the two most recent owners lacked the funds for basic upkeep.

“What was the very first thing you did?” I ask, trying to imagine how Wiley narrowed down the scope of the overwhelming project before him. He tells me that the second-floor fire damage was the priority, and that he and his crew salvaged what they could from the building’s east side before moving on to larger-scale structural matters.

The direst of these was the fact that two adjoining walls on the building’s southwestern corner were beginning to pull away from each other, creating a gap wide enough to let daylight in. Wiley explains that sometime around the 1960s, the owners carved out a large area on the first floor, eliminating some of the building’s essential structural underpinnings.

“They put a [support] beam in there, but it wasn’t doing the job,” he says. “All of the weight was actually pushing out on that corner, and it was going on for years.” After rigging temporary walls out of sheets of plywood, Wiley and his crew were able to take the problem corner apart and rebuild it, salvaging whatever original bricks they could and interspersing them with new ones.

Wiley, whose great-great-grandfather moved to the Mount Pleasant area on a land grant after the Civil War, explains that there are no existing original blueprints of the building. All he and his crew had was information that Oetken had gleaned from period newspaper articles, and the town’s institutional memory of one of its most cherished structures.

One night in the weeks leading up to the building’s ribbon-cutting in August 2014, Oetken walked upstairs to find local furniture maker Jerry Kracaw, who was restoring all 32 of the building’s intricately crafted trefoil-arched windows, taking a nap on the floor. He had been working around the clock to finish restoring the frames and panes before Gov. Terry Branstad and other dignitaries descended on Mount Pleasant to celebrate the building’s rebirth. Kracaw and his wife, Kimberly, were able to salvage 11 of the original wood windows, patching rotted or weathered areas with epoxy. He made the other 21 from scratch.

“None of [the windows] were the same size, because they were handmade to start with,” Oetken says. Kracaw made each new frame a standard size, shaving them to fit each window well as he put them into place.

“To me, it’s a privilege to be able to do it the way our forefathers did it,” Kracaw says of his painstaking process.

It’s mid-afternoon, and the women of the Union Block Revitalization Committee have gathered at a round table on the third floor. Composed largely of retirees, the group has reunited to reminisce about the fundraisers they planned to benefit the Union Block.

While roughly half of the restoration was financed through federal tax credits and local and national grants, about 18.5 percent of the project’s final $3.9 million price tag came from community donations. One fundraiser was a Dancing with the Stars–style competition featuring local talent, including a grandfather-granddaughter duo and the high school dance team. A charity dinner in the town’s funeral parlor (the former home of original Union Block investor E.L. Penn) raised a few eyebrows, as well as nearly $20,000 in donations.

“You don’t want it to just be about big donors, because then no one feels the same ownership in this building,” says local historian and committee member Pat White. “There’s a tremendous pride in this finished building.” Mount Pleasant is already seeing the benefits of the Union Block restoration. The Hotel Brazelton, another mid-19th-century structure around the corner, is being rehabilitated into apartments by a private developer, and Oetken and city officials are hopeful that this is just the beginning of a downtown renaissance.

“I think if you’d asked any of us seven years ago, eight years ago, would we ever see this building renovated, we probably would have said no because we just did not know how to begin,” Oetken says. “We did have quite a few people saying we would never get it done. To them, it was just an old building. To me, it’s a piece out of time.”